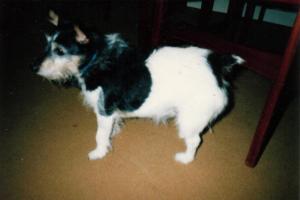 I do miss my little Scrappy dog!

Sorry for the delay — I’ve been busy the past few weeks, er, recovering from surgery, and playing old games like StarCraft and Deus Ex a great deal, largely so I can justify playing the more advanced sequels (and in the latter case, prequels).

I’ve gradually been getting more active, walking all the way to North Finchley to get new glasses, and almost every day taking a stroll around the nearby Victoria Park (not the famous one in the Olympic area, the one in north London) in order to keep my Fitbit steps up, and pet dogs, something you’ll recall is vital to me, and part of my recovery!

On that topic, one possibly positive outcome of my brain surgery is that I seem to remember things more viscerally now — including the Jack Russell I grew up with, Scraps, the best dog ever!  I hadn’t previously lost any factual memories through amnesia, but although I remembered her fondly, only now, perhaps due to my experiences with all the living dogs I’ve petted recently, do I recall the feelings of having her around — the little movements, the eye contact, the way she’d sometimes (if I’d been good) lick my face… and even the sound of her voice, when she was nagging to be let through a door, playing tug-of-war, or even trying to say “hello” when stretching out!

But as for the surgery itself, and the follow-up appointments… well, with the state the NHS is in at the moment (due to either the incompetence or the privatisation desires of the current government), perhaps I shouldn’t be surprised that my latest checkup was two-and-a-half hours delayed?  To be fair, the brain-butcher I was supposed to see was allegedly helping a “complex case”, but it was still a hell of a wait before I could speak to a somewhat condescending man, even if he seemed to think I’ve come off better than expected, with the likelihood that it’ll be 5-10 years, instead of 3-5 years, before I need more serious treatment.

Still, I’m glad I’ve got another MRI scan booked for next month (at my request), as although I’m not in the situation I was in before surgery (my last official burst of “mind static” being literally the night before, while giving information to a nurse), strange things still happen — not distorting the English (or Japanese) language in whatever I’m experiencing at the time, but nonetheless a weird dizziness, which may actually be combined with a feeling of weakness in my right leg!

If only I lacked a spare tyre around my waist, like those two studmuffins…

Hopefully that’s just the temporary result of my having resumed personal training over the past few Fridays, including both boxing in the park and weight training in the gym — the only reason I go to the Castle while I’m advised not to climb, though the quacks certainly encouraged me to work out!  I’m probably only this alive thanks to my PT’s near-constant guidance and support since March 2013, with only occasional breaks (this one having been the longest) from his “personal torture”.

He’s not the only one of that trio I’m seeing again, though: it’s been four years, but I’ve reconnected with a famous female dating coach (with a professional name inspired by a Batman character), as I feel like it’s time I got back out there on the scene — for the simple reason that, of the four women I mentioned last year, the first two I haven’t seen in ages due to not taking part in the activities where I met them, the third I haven’t heard from since the start of the year, and the fourth… is more like a sister to me, even coming to visit me in this bit of London back in May, before I went to Worthing for recuperation.

Yes, I need to get back out there — and I’m working on that, thanks to two more teachers who came into my life since that original trio: I’ve resumed salsa classes, despite now being in a more tricky location (a long walk from Archway station instead of a short walk from Old Street station), with the cheerful bloke who runs them, and from tomorrow I’ll restart my guitar classes, with the young bloke who taught me late last year!

(Fortunately, since I managed to pay for my new glasses and dental treatment through my work-based medical insurance, I should still finish this month in the black!)

It’s still a week until my OH assessment, which will determine whether I can go back to work, and on what time basis (the quacks say I should do two half-days a week, but I’d gladly take better advice), and in the meantime I need to get back into a routine — though I think being awoken at 7am by Chris Evans may be overly optimistic, as I’m still having a lousy time getting enough sleep at the moment, perhaps due to the heat, or skin irritation caused by one of the bits of medication I’m taking to keep my head together (*cough*lamotrigine*cough*). However, going to bed at 11pm and getting up at 8am may work for now…

Oh, and one more thing: although every other housemate has been replaced once since I moved into this place (including the Indian guy by my very own “best mate”), one room has had five female residents since I’ve been here, including the one who just moved in (and the second, non-consecutive, Spaniard)!  This is the first time I’ve explained everything to the new girl, and I’m starting to feel like the father of the household again… which means I really am back to my old self, doesn’t it?

P.S. Yes, I’m aware that Gorillaz are back on the scene as well, and I got The Now Now on the day it came out (another time I walked to North Finchley) — so here’s the video from their main single (guest starring Jack Black, but not Murdoc)…